This website offers categorized collections of hundreds of web links to other websites about the El Morro Valley Area.  Many websites and web pages are continually changing their web addresses or completely disappearing from the web. This causes a broken link that leads to a "dead end" or to a completely different website that has subsequently assumed that web address. The weblinks on this website are updated infrequently, so you may encounter numerous broken links.   We apologize for this inconvenience.

Did Billy The Kid Live into Old Age in Candy Kitchen, NM?

The Old-timers in Ramah, NM can tell you about another Old-timer, who wandered into the area in the early 1880's and settled here with his Mexican wife Isadora.

In the online book "Ernst Albert Tietjen - Missionary and Colonizer" By Gary Tietjen, this excerpt tells about John Miller, an old timer living in Candy Kitchen, NM, who many were convinced was really Billy the Kid.

of our stories thus far rivals a story of New Mexico’s—nay, the nation’s—best-known outlaw.  It was reported that he was shot and killed by Pat Garrett on July 14, 1881. There is an interesting tale of a mysterious stranger who came to the Ramah country to live shortly after Billy the Kid was “killed”. The man went under the name of John Miller and lived in the country southeast of Ramah, around Cerro Alto.

In an interview with Atheling Bond, this author was told that when Billy the Kid was shot by Pat Garrett, his body was turned over to the Mexican women for burial. They found him still breathing and substituted for his body in the coffin that of a Mexican man who had died the night before. One woman, Isadora, carefully nursed him until he could be taken by night to Reserve (then Milligan’s Plaza), where he recovered. His brush with death convinced him to leave Lincoln County and to live under an assumed name in a very sparsely populated area. In that way he made his way to the El Morro country under the name of John Miller.

Atheling and a friend, Rulon 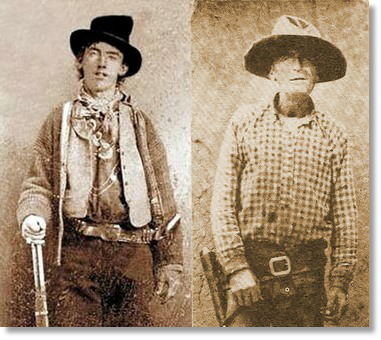 Ashcroft, had ridden all one day around Cerro Alto. Night fell, and being many miles from home, the boys decided to stop by and see if they could stay all night with John Miller. Atheling said that “After supper, we got to talkin’ about Billy the Kid. Course, he always said he wasn’t Billy the Kid, but he told how many times Billy the Kid was shot. There was a six-shooter hanging up on the wall, so I said, ‘What’s all those notches on that six-shooter?’ He said, ‘Well, those represent the men I’ve killed.’ It was about eight inches longer than an ordinary six-shooter. We got to talkin’ and he pulled off his shirt and showed us his back where he had been shot. Where the shots came out there was a white spot about the size of a fifty-cent piece. Where they went in they were about the size of a 22 bullet—the white spot was real small. He had been shot about twelve times. You could tell real plain which ones were shot in front and which ones were shot in the back.

“Then he got a rope and put it on his wrists and said, ‘Now tie me up. Tie this like you was puttin’ hand cuffs on.’ So I tied it tight like I was hobblin’ a horse. He just turned his hands and rolled it down off his arms just like that. ‘Now’, he said, ‘Billy the Kid could do that.’ The next morning when we went to feed the horses, his wife said in Spanish, ‘His name is not John Miller, his name is Billy the Kid.’ She couldn’t talk a word of English. She told us how when he was shot and wounded she took care of him and had hid him in a straw mattress when the officers had come into her house. Her name was Isadora.

“When we got ready to go, he came out and there was a hawk flew over and he said, ‘See that hawk?’, and he never took aim or nothin’, just shot from the hip and that hawk came right down. We got to talkin’ about shootin’ and he told Rulon, ‘Now throw that hat up in the air and if it ain’t got five bullet holes in it when it comes down, I’ll buy you a brand new Stetson hat.’ So Rulon said, ‘Why, you can’t do that—nobody can put five bullet holes in a hat in the air like that.’ So he threw that hat up and when he picked it up, it had five bullet holes in it—and it wasn’t so that they come in one way and went out the other—there was five holes in it.

“John Miller used to go over and visit old Herman Tacklanburg a lot. My Dad and I went over there one night and Tacklanburg gave us a bed and him and John Miller sat out there on a log all night long and talked. Next morning John Tacklanburg told my Dad that Miller was Billy the Kid, but he was tryin’ to do right now and goin’ under a different name, but not to cross him and you won’t have any trouble with him. All the outlaws were acquainted with John Miller. There was a Carl Manning that stayed with him quite a bit. He told Miller that he was going to steal this one horse from my Dad, and Miller said, ‘Why are you going to do that? These are poor people and that’s all they have.’ Manning said that didn’t make no difference, he liked that horse and was going to steal him. So John Miller came in and told my Dad and Dad put a chain around the stable door and put a lock on it. The next night after John Miller was there, he went down there in the night and found the chain nearly filed through.”

A reporter from Gallup interviewed Tacklanburg in his later years and heard his story. As a stowaway from Germany he came to this country and worked his way to the Ft. Sumner area where he knew Billy the Kid as a youngster. Later both of them came to the Ramah area and Tacklanburg recognized Bonney but kept his identity close. The story of Billy the Kid being around Ramah precedes Atheling and involved Ernest’s family. Tom McNeill told Warren Child that while the Tietjens were living in Savoyeta Canyon a group of outlaws came by and demanded a meal. Emma O. was alone at the house. During the conversation she got very mad about some remark that one of the outlaws made and she picked up a bowl and hit him over the head hard enough to break the bowl. The outlaw took it gracefully. Later she was told that she had hit Billy the Kid over the head. This was sometime prior to the time they moved to Bluewater. If it was Billy, it was characteristic of him. He was always in a good humor, and always courteous to the women.

Another part of the story came from a Navajo who worked for Adrian Berryhill. This Navajo, Max Miller, had been adopted as a child by John Miller and raised by him. My brother, Joe Tietjen, worked with Max. On several occasions, when Max had started to drink, he told Joe and Adrian that Billy the Kid was his dad. Perhaps he had been warned not to tell this and it was only when liquor loosened his tongue that he let it out. This story of John and Max Miller was well known to Gene Lambson and to the Crocketts who lived near Miller. It is recorded in a forthcoming book by Helen Airy of Albuquerque.

In partial vindication of this story we have evidence from a number of sources that Billy the Kid did not die that night in Ft. Sumner. There were a number of people who did not believe the account given by Pat Garrett, partly because Garrett was not wholly reliable as a witness. One of these was a Mr. Poe, a cattleman who drove cattle from Coleman County, Texas, to Lincoln County. Poe was a cousin of the John Poe who was present when Billy was killed. Poe was interviewed by D.D. Sharp in 1938 as part of the Federal Writer’s Project. The interviewer wrote that Poe “doubts very much if Pat Garrett really killed Billy the Kid. For one thing he says that Frank Coe told him some six or eight years ago that he (Coe) could saddle his horse at sunrise at his ranch on the Ruidoso, near the resort there, and eat supper with the Kid at sundown.”  It must be admitted that Frank Coe was an important witness. He knew the Kid well and had often ridden with him.

Billy the Kid’s body was turned over to friendly Mexican women, moved to the carpenter shop and buried as soon as possible next day. A key point is when the body was moved. Deputies Poe and Rudolph say the body was moved the night of the shooting. The coroner’s jury said they examined it the next morning in Maxwell’s room, so someone who was there is not telling the truth. So angry were some of the residents of Ft. Sumner over the killing that Garrett and his men barricaded themselves in a room that night for fear of an attack.

A story that has recently surfaced (Arizona Highways, July, 1891) tells how Garrett took Billy’s girlfriend captive, and when Billy came into the room, they shot him.

Poe mentions Perry Carney who was the right hand man of Pat Coglin, cattle king, who lived at Tularosa. The little Irishman worked for him and received the stolen cattle the Kid brought. He says, “Perry Carney told me and two Mexicans told me the Kid positively was not killed. Carney told me the Kid came over and got a saddle after Pat Garrett was supposed to have killed him”.

Another story that Billy was not dead was told by Ben Kemp Kemp had made the acquaintance of Henry Cox at Ft. Davis. When he next saw Cox, “They told him that after leaving Fort Davis, they had moved to White Oaks, New Mexico where they had lived for two years. During this time, Henry Cox’s daughter, Tibitha, married a cowboy by the name of John Collins. Later, the family learned that Collins had been a friend of Billy the Kid. He had warned the Kid against going to Pete Maxwell’s house in Ft. Sumner on the night of July 14, 1881, when Sheriff Pat Garrett supposedly killed him. Collins claimed the next day he helped bury the corpse of the man Garrett killed and it was not Billy the Kid.”

While John Miller was an impressive outlaw, and it is possible that he was Billy the Kid, there is so much evidence to the contrary that we take the story with a grain of salt.

Other Books About Ramah Pioneers by Author Gary Tietjen

More Stories about Billy The Kid - aka John Miller